Congratulations and Thanks to Mary Ann Honaker! Read My Blurb for Gwen and the Big Nothing!

A package got sent to my old address and eventually got to me on Sunday. 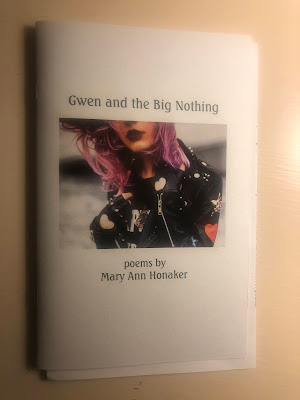 It was an advance copy of Gwen and the Big Nothing, the new collection by poet Mary Ann Honaker a one-time regular "invader" of Stone Soup's open mic from the North Shore. I had looked at her manuscript and sent over some thoughts back last December. It was a treat to get the actual chapbook a year later from Orchard Street Press with my wordy praise on the back cover. 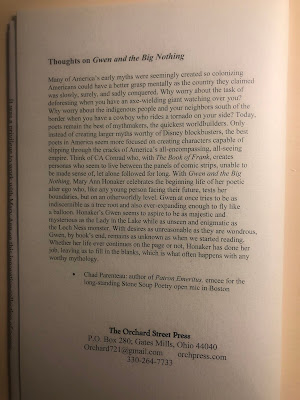 For those of you who don't want to squint, here is what I wrote:

Many of America’s early myths were seemingly created so colonizing Americans could have a better grasp mentally as the country they claimed was slowly, surely and sadly conquered. Why worry about the task of deforesting when you have an axe wielding giant watching over you? Why worry about the indigenous people and your neighbors south of the border when you have a cowboy who rides a tornado on your side?

Today, poets remain the best mythmakers, the quickest worldbuilders. Only instead of creating larger myths worthy of Disney blockbusters, the best poets in America seem more focused on creating characters capable of slipping through the cracks of America’s all-encompassing, all-seeing empire. Think of CA Conrad who, with The Book of Frank, create personas that seem to live between the panels of comic strips, unable to be made sense of, let alone followed for long.

With Gwen and The Big Nothing, Mary Ann Honaker celebrates the beginning life of her poetic alter ego who, like any young person facing their future, tests her boundaries, but on an otherworldly level. Gwen at once tries to be as indiscernible as a tree root and also ever-expanding enough to fly like a balloon. Honaker’s Gwen seems to aspire to be as majestic and mysterious as the Lady in the Lake while as unseen and enigmatic as the Loch Ness monster.

With desires as unreasonable as they are wondrous, Gwen by book’s end remains as unknown as when we started reading. Whether her life ever continues again on the page or not, Honaker has done her job, leaving us to fill in the blanks, which is what often happens with any worthy mythology.

Posted by Chad Parenteau at 8:41 AM

Email ThisBlogThis!Share to TwitterShare to FacebookShare to Pinterest
Labels: Gwen and the Big Nothing, Mary Ann Honaker, Orchard Press