Thanks for being there on our all-open mic Wednesday. I've been moving on from one thing to another too fast, but just as many of you have said this weekly gathering, is helpful, it's been just as helpful for me, if not more.

I'm not sure why, but this for the first time in a a while (maybe ever?), I decided to write this in the first person. That might be the most I have to say about it right now. Thanks for reading.

The sun coming down
is not my spotlight
and not even about me.

Squelch my monkeys
hitting the alphabet
for my prosperity!

I can't resist theory
that my pulse beats
to my ideal soundtrack.

The key to music an
equation of heart beats,
that makes leaves turn.

Oh the delusion of thinking
that for a song, others will
employ you for life,

That they stand ready
to take my last day
work shirt as a shroud.

That snake oil salesmen
will fumble for the real stuff
to keep me on the clock.

I say now: Burn down
the last of your family's
secret plantations!

while in wine cellars
cousins fight over last dance,
create own Battle Road

as they pace back and forth,
burn their own barns down
with feet's own friction.

Their meet with God will be
awkward, pallbearers playing
rock, paper scissors to avoid front.

For the rest of us, the world
is an orange, rotting slowly
seeds hidden, unshared.

This letter is an afternoon
motel stay, putting off
our out to world's end,

distance away already
written in alien tongue
by those who will replace us. 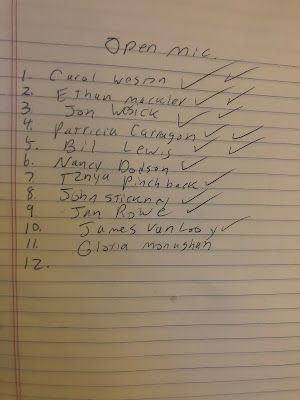 Posted by Chad Parenteau at 9:02 AM