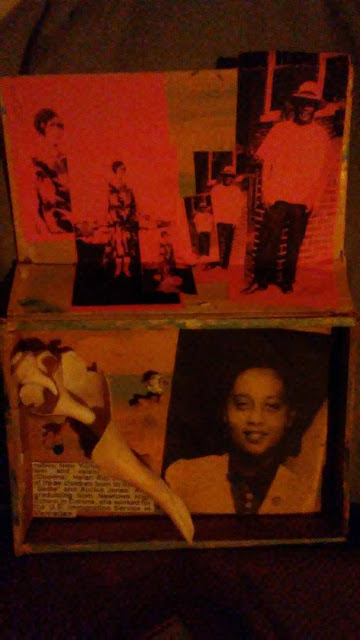 Time to reflect and reorganize.
Above is one of series of collages which was part of exhibit I created about My MOM and Alzheimer's Disease. It was a small installation on exhibit at a venue.
I used old cigar boxes to tell my Mom's story. The boxes were used as metaphor for the disease.
The person with Alzheimer's Disease often views life as a series of disjointed stories linked by main character's (her/him/their)  sense of time and space.
The photos above MOM's photo are those of my MOM's Mother and her father, my Grandfather.
I never knew my Grandfather. He died shortly after I was born. My Mom's photo is below. Mom loved the beach.
She later became somewhat of  a world traveler.  She went to China, and visited a school. She said the children gathered around her; they thought she was Chinese!  That happened in the US too.
My MOM, was a beautiful and generous woman.
Follow Janet Cormier's column, Bamboozled No More!, every Friday at Oddball Magazine.
Posted by Chad Parenteau at 2:42 PM