Stone Soup happened. In fact, it happened twice. I'm happy to have provided an outlet for poet friends who were able to overcome their exhaustion for an hour or two so we could share our words. I have only been able to do a crouton poem from yesterday's open mic. I should do a poem from the Election night open mic, but I haven't gotten around to it yet. I was too exhausted to try come Wednesday.
It's funny. I get the feeling that if I had done a crouton poem from Tuesday, it would have been very depressing and pessimistic. Today's poem is more positive. I've been trying to not do a victory lap before anything has been announced, but my relief in the verse below can't be hidden. It may be hiden behind a heap of nonsense, but it's there.
It'll be interesting to tackle Tuesday's open mic and see what happens. For now, I have this to offer you. Thanks for reading.
The Left Behind
Tacos bomb the streets
as food truck messiahs
autofill new orders
for the red hats standing
at a loss for steak n' cheese
sandwich options.
Customers outside
wants to be a driver,
not a passenger.
A storm is on the way.
Everyone stays in line.
demanding service:
Back to white bread.
No guilt, no peace tea
from new owners.
Just black coffee.
Let the servers smoke
real roaches in back
and wait the whirlwind
out in their vehicle.
Armchair warriors
don't see capitulation
on TV, see own gravestones,
stay home from work.
Mad world wants to stay mad,
sees moonlight murderers coming
for MAGA moonlighters
now hiding from keyboards,
screens taped over,
unprecedented penalties
imagined. Buddha is a rock
ready to be thrown
at the first honking car.
How much more undoable
can be done before deluge?
What can be planned
before boredom declares
martial law? Hive mind
hard to reanimate after
excision. Irrelevance
hard to spell and swallow.
George Orwell is old,
well past 84, lives on
through misunderstanding,
People strap giant boots
on back, cry victim.
They love big brother,
surrogate father deadbeating
down door on way out.
A million big daddy widows
suffer mania's menopause,
hallucinate a million roaches
in their kitchen floor,
declare, it's their time now,
finally button over lips
and bunker down for winter. 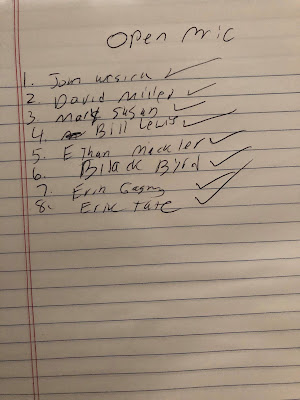