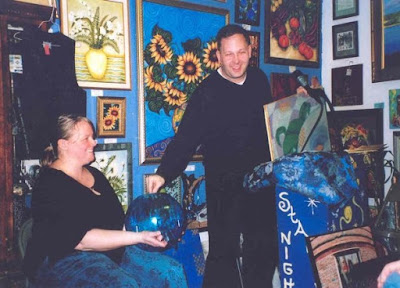 A funny scene from the 2008 Out of The Blue Holiday Raffle. It was the second raffle we ever did for the  Out of The Blue Art Gallery. It ended up being the last for reasons I won't get into here.

For the raffle, Lynne had the idea of using a spinning ball for the tickets instead of just picking them from a shaken box. We bought a giant hamster ball, which of course had holes. To solve the obvious problem, we covered the ball in tape. Nice idea, except for the fact that the tickets kept getting stuck to the tape poking through the holes.

To make this even goofier, I played "Hampster Dance" while Lynne spun the ball. I got the song from a birthday card my Mom sent me (this was before everyone had an iPod or an iPhone).

We looked ridiculous, but it was the highlight of hosting that event.

Email ThisBlogThis!Share to TwitterShare to FacebookShare to Pinterest
Labels: 2008 Out of The Blue Holiday Raffle, Lynne Sticklor, Out of The Blue Art Gallery, Stone Soup Poetry