Yesterday I found out that Brendan Trider not only passed away but was already buried. This news is likely still continuing to shock people.

The poet I would come to know as Bluu Kollar was only a blip on my radar for a time. Possibly because he would come to enter and exit the local poetry scene both abruptly and memorably a few times.

I remember one incident that seemed to result in him removing or at least hiding his profile from Facebook. He was angry at someone. I didn't even know who, but it wasn't me, so we private chatted. I never figured out the source of his frustration, but he at least hinted that he would be back. I would grow to love it whenever he did return. He would perform several times at Stone Soup Poetry's open mic, most memorably in this one open mic with the poem "Ugly." This has to be my favorite piece and performance of Brendan's. Maybe one of the best single things I ever recorded on Stone Soup Poetry's open mic. I'm not joking.

You might have had to be in the room. I remember this taking the entire gallery by surprise. I seem to remember at least a couple of slam veterans in the room when this piece was performed blown away, perhaps not expecting stark performances like this at Stone Soup. It has happened much, much more since then, and I'm glad that Bluu was a part of some of those shows. If I had goten my way, he would have been there every week. It was fun trying to figure out what he was going to unleash on the audience.


The last time I saw Brendan, it was in January during talks over a controversial incident that occurred at the Lizard Lounge. There was a lot of talk about safe spaces at open mics. Brendan didn't host a venue. He was just there as a concerned poet. He left abruptly, and not without some anger (though this anger not taken out on me or anyone there).

I came to understand that he had a particular progressive mind and outlook that was hard-earned through years of difficulty and mental illness, which he often shared through his poetry. Any self-made person like that can have a hard time if they feel like someone's telling them they have to change. He was someone who already thought long and hard about topics like mental health, race and sexuality. Maybe felt like he was waiting too long for other people to catch up, hence some of the frustration that came through in his work, sometimes shockingly, sometimes beautifully.

He was relentless in the expression of his outlook, right or wrong. Agree or not, as a performer you wanted him in your corner. That might be why I never worried about perusing him after his walkout. I always figured he'd be back eventually. I just had to lay off and wait.

Sadly, life never tells you when you're waiting too long.

Thank you for the time you shared, Brendan. If you come around again, I'll be sure to take more footage next time. 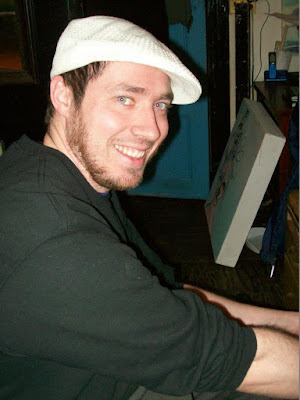 Posted by Chad Parenteau at 8:19 AM