I Had Issues! My Review of Folly: The Consequences of Indiscretion by Hans Rickheit 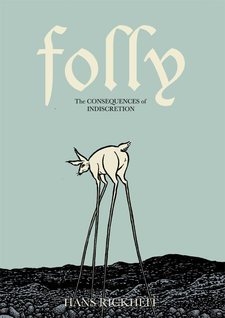 Hans Rickheit is someone I've written about and supported for years. Sadly ost of my published work appeared in zines from the early 2000's, which I may reproduce someday. Until then, this is the only online review I've done in the last ten years. Will I write about him more in the future? We'll see. Originally published October 5, 2012. Edited for clarity.

Putting aside the self-deprecating tone found in Hans Rickheit's newest collection (including another introduction by E. Stephen Frederick, who I'm starting to view as Rickheit's collaborator of sorts), I could list many more examples of his older zine work that he would call actual folly. And I would have loved to have seen those included.

I went for this book thinking I might find work like his Sigmund Freud mini comic from a decade ago or the first issue of his abandoned Henry Darger bio The Warstorm. Even the first two issues of his other abandoned series, False Transmissions. Or Kill Kill Kill (that last one easily putting the author's most visceral emotions on display). Sadly, these remain uncollected, though he might reconsider one day.

I absorbed Rickheit's early work when he lived in Cambridge, Massachusetts and sold his work at Newbury Comics and Million Year Picnic. As someone harboring a minor obsession that peaked with spontaneously filming a documentary while staying over his house, I can tell you with authority that there are gems from him out there that I hope don't get lost amidst his growing body of work. 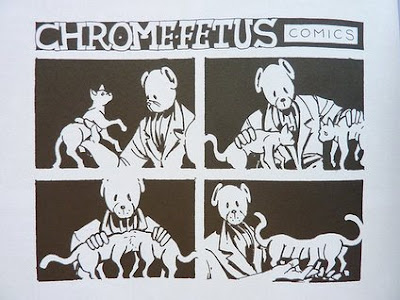 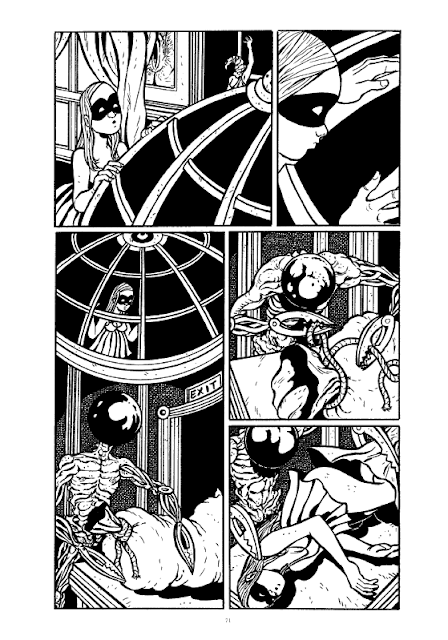 Though the name at first glance suggests that the work is throwaway (and yes, there are some strips like the one above that seem like early exercises), the majority of Folly: The Consequences of Indiscretion is Rickheit hitting his stride.
In the journey form the minis I listed to his graphic novel Chloe, he started to find the tracings of what is his current voice. He's found a perfect vehicle in his "Cochlea & Eustachia" strips that started showing in his mini-comic Chrome Fetus Comics in the early aughties, later appearing online with no stop in sight.

The two female characters are Rickheit's perfect outlet, carrying the balance of assumed innocence and creepiness found in many of his characters. Compare Hans' drawings of Cochlea and Eustachia to Danny Hellman's otherwise great homage below, which leans towards innonence, as if to play it a little safe. 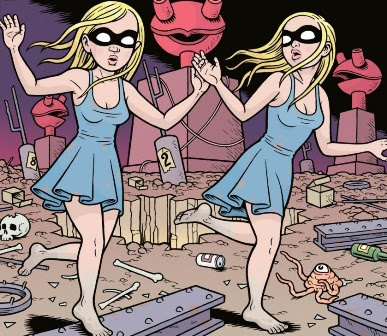 If you go the other end like Josh Simmons did (linked because really NSFW), you lose the thin veil that makes you think they are innocent (at least for awhile).

Make no mistake, Rickheit's work can be hard to read. That's even before you read "Hail Jefferey" (the best Bush-era inspired strip that too few people have read), there are disturbing, sometimes overtly violent imagery coupled with imagery that started out as Freudian that later became Rickheit's own language of symbolism. Too dream like to have a recognizable start-to-finish, too linear to write off as nonsense you'd wake from. If you stick with him, as with any good author, I tell you his work will start to make sense. You might not like the meaning, but for me the journey from point A to B is very rewarding.

A writer I workshop with (who I'll claim is the most important rarely published poet in America) often equates his work as masturbation. He also states that most people write the same poem over and over. Therefore he enjoys the process of creating more than the created product. I disagree with his first statement but understand the last two. Hans seems to tread a similar path with his "Cochlea &; Eustachia" episodes and the majority of the miscellaneous work presented in Folly. Many of the strips end with similar ambiguity. After a while, the symbolism becomes familiar if not entirely understandable. With each rereading, it's the middle part that grabs you as you look for more continuation without caring about resolution.

I've read enough of his work to find an underlying theme, one that works for me anyway. What Rickheit calls "The Underbrain" throughout his work I've identified as his embodiment of the creative process. His characters take long, painful, drawn out and mysterious journeys, because that is the creative process. And as Rickheit displays in works like The Squirrel Machine, creating is not always a benign act and not always harmless, and that's as true in art as it is in industry.

Rickheit clearly wrestles with the meaning and purpose of his work with every page he creates, as many artists do. Hans might be considered rude for speaking so out loud about it if more people hung around long enough to listen. Me, I'm so ensconced in his Underbrain, I'm taking notes.