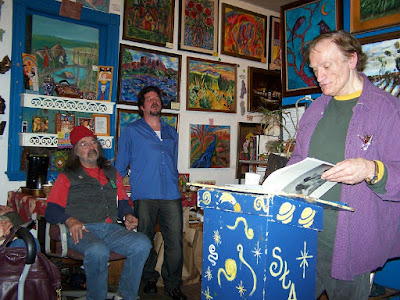 Another Bill Perrault photo of the late Charles Shivley, a gay rights activist who read at Stone Soup a couple of times (with the help of Jpeole im Dunn, standing to the right of Jack Powers watching on).

Shivley's Alzheimer’s illness was in effect during this time, so I never got to really speak with him, though he could still read a poem after all those years in between all the stories he still kept in his head.

I hope I can uncover some video of Shivley reading. It would be great to share after all this time.