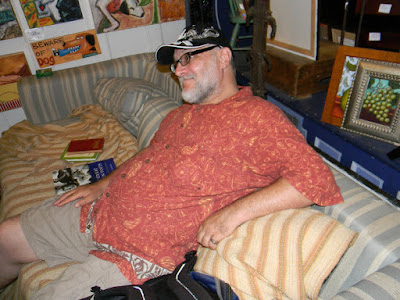 This is one of the earliest surviving photos I ever took of the man whose eulogy named him Ronald "Wayne" Nickerson, though he was known to the Out of the Blue Art Gallery Cambridge crowd as R. Wayne or simply Wayne. I called him "R."

Looking at my social media, at first I determined that I met him on July 26, 2010, the night of The "Chad F***ed Up" Open Mike Extravaganza. It was a goofy title I used when I wasn't able to secure a feature for the live readings (a problem that was rarer in the good ol' days).

Looking back, that night of nonsense would have been the perfect time for Wayne to debut. He was a fan of fun nonsense.

But wait, check out this 2009 video where he joins others in paying tribute to the late Brother Blue. When the mood got serious, so did he.

I lost quite a bit of Stone Soup data in 2010 when I tried to keep my work on a terabyte drive bought at BJ's Wholesale Club. Therefore, I have no idea when Wayne exactly started attending Stone Soup. At the same time, he was such a frequent presence, it feels like he had always been there, always participating at Stone Soup and Deb Priestly's Open Bark as a performer and a listener. He eventually had three well-deserved Stone Soup features. Throughout his time, there were many poems and songs about slaying one's personal dragons.

Wayne often occupied the "Lee Litif" slot on the open mic, the very first spot reserved for the most extroverted exhibitionists among us poets. Wayne took the point proudly each and every time. His accessibility and personality helped start the night off with high energy. After that, it was only a matter of making sure he didn't misbehave too much while hanging with the rest of the audience. I remember an infamous night in 2014 when Jason Wright was sitting next to Wayne and by the open mic's end was reduced to being the giggling Beavis to Wayne's provoking Butthead. 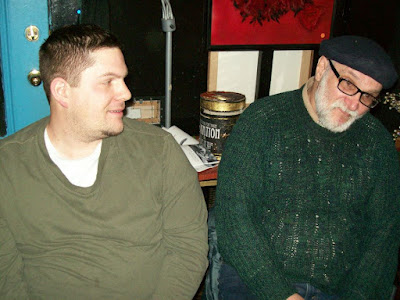 One Monday he gave me a tin filled with marbles saying he had previously lost them and could I hold them for him?

I never had a chance to give them back.

I last saw Wayne in  July of 2015. That year was when a lot of good and bad happened. The year that predicted the years of Trump and alt-right induced suicidal ignorance. The year Black Lives Matter picked up steam. The year Stone Soup attracted many young progressive performance poets and listeners. The year when older Stone Soup regulars butted heads with younger poets. The year people drew lines in the sand. The year friendships were lost.

I believe Wayne, someone I would have labeled a progressive or at least leftist, felt intimidated by the younger crowd, they way many of us did. One night, he left for good after performing on the open mic segment of the Stone Soup Poetry Slam. He marched out right after a post-poem tirade. It was one of many awkward moments that year, and I was not equipped to deal with it.

In the weeks to his departure, Wayne made strange claims that he was coming into money, that he was going to financially back the Out of The Blue (then struggling to stay in it's final Cambridge home). I actually hoped this was true. An R. Wayne Nickerson backed gallery might have been short-lived, but it probably would have been more fun.

To the best of my knowledge, Wayne never came back, never sought out the various new locations for Stone Soup over the years. When going over Stone Soup memories recently, I thought about inviting Wayne back after the pandemic if he still wanted to read in person. Of course by then, I'm sure it was far too late, given his battles with Parkinson's and cancer.

His dragons were a little tougher than mine. I'm certain he put up a fight.

"RIP to  a legend" wrote north shore poet Carmelo J. Rizzo poet recently on Facebook when news of Wayne's passing started to spread.It reminded me how little I knew about him outside of his time with me in the gallery. I appreciate his family including how he was a poet and artist in his obituary (something that gets tossed to the wayside too often). Moving forward, it's the least I can do to try and preserve his work and try to have it survive in some way.

Get some rest, R. You've earned it. But then go get that dragon!

Thanks for writing this thoughtfully, Chad

Your words hug us all with the memories of Nick. Thanks Chad.