I Had Issues! My Review of Diabetes Is After Your Dick 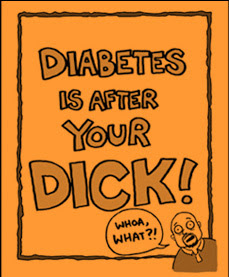 It's a small review, but I love Cathy Leamy and it's been too long since I've promoted her work. Plus you can read the minicomic reviewed here on her website. She's made great strides in her medical comics work since this review,which is great. Originally published October 24, 2012. Edited for clarity. Let's face it, I straight up rewrote this to make sense. Yes, even a short post like this needed it. As I've  mentioned before, I wrote way too quickly back in the day.

I work in the medical field.  I don't think any hospital would ever put this mini-comic by Cathy Leamy out, title change or not.  That's a shame.

Leamy also works in the medical field, so she's obviously coming at this educational comic knowing that medical brochures need more straightforward language and a breath of personality. Everything  in this little pamphlet is accurate and explained in a fresh way I don't see often.

Most of the educational tools I've worked with in explaining diabetes deal with less interesting concrete analogies (there's one where we take a hypothetical glass of water, an egg, a spoonful of sugar and I've already lost you). As a cartoonist, Leamy is able to use her metaphor by way of her visuals and bring it to both a logical and humorous conclusion without losing the information. A nice talent used effectively here.

The title is an attention getter, but once past the cover Leamy maintains your attention all the way to the end. Lighthearted without making light of a serious illness. A job well done. We need more nonfiction comics work like this.

Email ThisBlogThis!Share to TwitterShare to FacebookShare to Pinterest
Labels: (Sometimes) Wednesday Comics, Cathy Leamy, Diabetes Is After Your Dick, I Had Issues