I Had Issues! My Old Review of The Revival #1-4 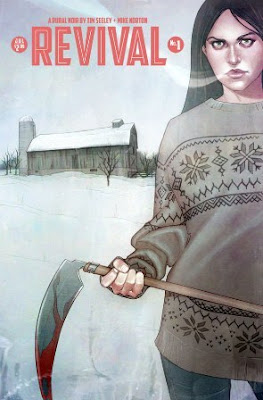 Hey, another review I should have posted last week (Day of the Dead post anyone?). This didn't turn out too bad. The review I mean. I did follow The Revival for a while but had to drop it when other life things came up.  I should catch up with it someday. Originally published November 2, 2012. Edited for clarity.

Over the last few years, there have been a lot of takes on The Rapture, Judgment Day, and other end of the world scenarios. It's created a lot of what I'll call "Apocalit" out there, and I haven't gotten around to reading a lot of it yet, though I hope to in the next few months. I guess that means I'm skeptic regarding the hoopla about the world ending, given that it's the end of 2012 in less than two months.

I picked up the first two issues of The Revival from Image Comics on a whim, wanting to read some new titles but not knowing what. It was a nice surprise. I hadn't followed Tim Seeley's previous work-for-hire books or his independent Hack/Slash. Ditto for the work of Mike Norton, unfortunately (though his webcomic named Battlepug might make me a quick convert). This is a much slower paced comic than the samples I've seen from both creators. They do a very good job right off the bat with the story's vague future setting of a small Wisconsin community brought to a standstill by unknown events causing its recently deceased natives to rise from the dead. Bio terror is brought up just as much as faith-based theories. At the center of this (at least in issue #1) is Dana, a single mother and police officer who is assigned to deal with these cases. By the end of the first issue, she develops a connection to the so-called "revivers."

We're also introduced to Dana's family and a cast of characters that four issues later continues to grow with no sign of stopping. Thankfully, there are only a few quirky products from this not-too-distant future (gene spliced farm animals?), and the setting remains both real world and intricate. Norton does a very understated job in capturing the visuals of a small town in winter, giving us a sense of claustrophobia we'd likely feel even if there weren't a mystery with Al-Qaeda and the hand of God as suspects. Dana almost gets lost as the other characters almost crowd the story. Luckily Neely's dialogue keeps everyone interesting and intriguing enough to leave the reader wanting more back story for everyone that appears, even if you might need the back issues close by to help keep track. 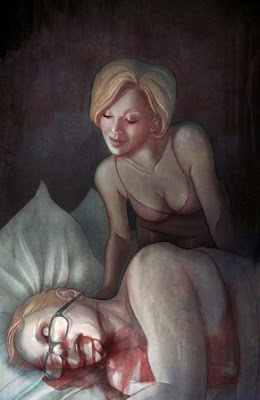 Seeley and Norton also balance suspense and the seemingly supernatural with hints of sci-fi (or what could be sci-fi). In issue #4 they try a direct mixture of both and I realize how much I want of the former. No spoilers intended, but the cover posted above of issue #4 really took away from the big shock reveal inside, and the end of it leaves me wondering what kind of comic I'm reading, but mostly in a good way. Religion of course is brought up but true to real life, spiritual implications are put on the back burner as the real-world and psychological implications of being brought back to life are felt by the revivers and their loved ones. Again, without giving things away, I feel some big reveals could be coming in issue #5 sooner than I'd like, maybe not, but I'm still keeping this on my to-buy list. If you like thrillers, this is good enough to justify dropping the 12 bills to get it (or at least get the first Image trade, which always lures you by being cheaper).