Stone Soup Croutons is a weekly poem I write using lines and impressions picked from Stone Soup Poetry's open mic readers and features. I figure out a title (and sometimes the rest of the poem) later. You can read the other ones I've done since 2015 here.

Stone Soup gathered the night before Thanksgiving. It was a fun night, much needed before the holiday stress of the past 24 hours. My own Thanksgiving went off without a hitch. The night before, however, I was fueled with the words from various people in the superspreader movement declaring war on safety and public health. That no doubt fueled my thought. Then there was all the talk about Hitler and death on the mic. I'm sure that helped. In a good way. Really.
Warning: This poem is going to sound a bit like my other crouton poem, "Fish on a Bicycle Pulpit" from my new book. Mostly because Bil Lewis read my poem as part of the open mic and I didn't realize it until he finished. Thanks to Bil for buying my book, and thanks to you for reading. Hope you enjoyed your time yesterday.
Thanksgiving Wars
News from the front
Racist barbers try
to bring back
Hitler's mustache
have concentration camps
pose for holiday photos.
What is the value
of mountains
if you can't see
anyone beneath you?
Raze the highland
below buildings,
everything just tall enough
to make them bow.
Young eat old,
hide evidence
of own language.
You must kill angels
for this year's feast.
The dead are not
allowed to expatriate
themselves from Earth
then come back for jobs.
Save gratitude when
this dying earth
has been inherited,
sedition against weak.
A true man needs
a sustainable world
like a bee needs
a second sting,
or a fish needs a
bike path, or a whale
needs its own blubber,
or a suicide needs
an incriminating note.
The Christmas preparation
party will continue
until morale or
mortality improves. 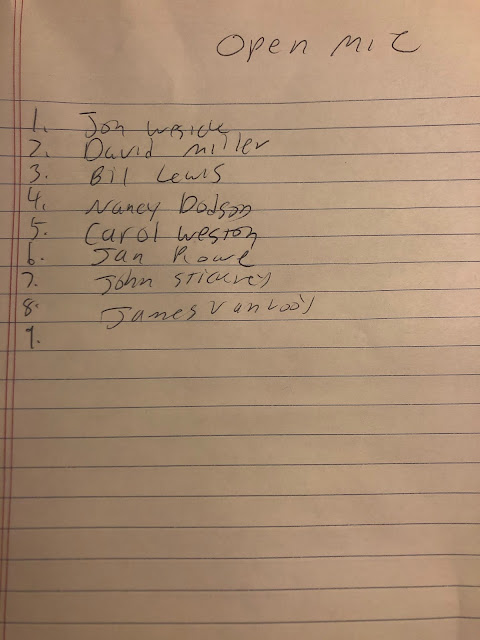