Stone Soup Croutons is a weekly poem I write using lines and impressions picked from Stone Soup Poetry's open mic readers and features. I figure out a title (and sometimes the rest of the poem) later. You can read the other ones I've done since 2015 here.
I also have a book out now collecting the best of my first year of poems. Click here to purchase it.
Stone Soup came back this week before the start of Thanksgiving chaos! Now with even more music that may or may not have slowed down my video of the night getting uploaded onto YouTube. Oh, well.
I cheated a little this week.
I noticed that last week's crouton poem received more hits than usual. I figured it must be because of the normal sounding title of everyday words.
I started to think of what other plain sounding everyday words I could use.
Then my performance review at work came up. And that's the poem in a nutshell.
But if you know anything about my method and the people that perform on Stone Soup's open mic, you know that's also not the poem in a nutshell.
Thanks for reading.
Performance Review
Your shell shocked month
hemorrhages points.
They'll never make an emoji
out of that stroke face.
It will take s steel worker
to reset your spine.
You '88 Red Sox style
comeback cut short.

Lie with the dogs
who look past your skin,
the sick of forgiveness
in your stomach.
It chides you like a roommate,
you creature curdle on the floor.
Who could ever think killing you
could bring them advancement?
What flavor could you bring
to someone's soup of adversary?
Who would ever seek out
revenge for a fart?
What rank can you afford
at an army surplus?
Could you be fired for trying
to unionize yourself?
The crippled canine in you
searches the seascape.
It wants to find the place
between air and water.
Just once to not choose
between sink or swim.
Next year's objective:
crystalize tears into currency.
Cash in on all false
claims of true love.
Meanwhile, your descendants
find you barely satisfactory. 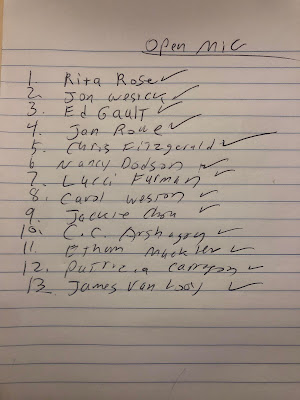