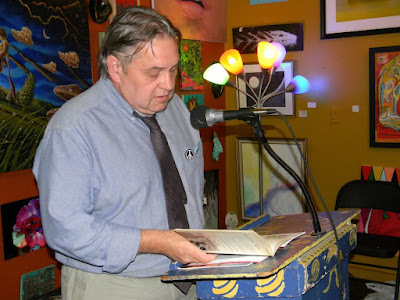 I've been trying to find things to look forward to in 2021. Haven't we all? Something on my list is the January release party for the Reimagine America anthology, where I'll be Zooming in and reconnecting with a bunch of poets. This included Blaine Hebbel, who I hadn't seen since way before the start of the pandemic.

I missed Blaine's regular open mic contributions during most of the Trump era (which he and I would probably agree is still going on). Blaine was one of many who stopped coming to Stone Soup Poetry when the venue moved to less convenient locations in downtown Boston and the Seaport area. I wanted to see and hear him read again. 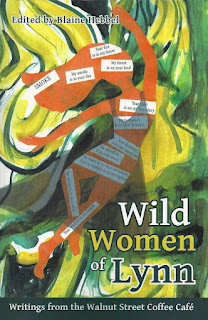 Blaine Hebbel passed away on Saturday. Now all I can do is wonder if any of the wild ones who tend to roam Lynn, Massachusetts will come forward next year to read his verse for the rest of us.

Blaine was one of the many writers who were part of the what I call the North Shore Invasion. For a few good years, poets from Salem, Beverly, Lynn, and Lynnfield would regularly travel down to Stone Soup in Cambridge. This was when Stone Soup was next to a location with easy-to-find parking. This was when Cambridge actually had poetry venues. Feels too long ago. 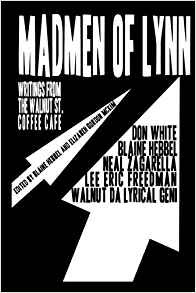 Though people have commented that he came back to poetry after an absence, Blaine always seemed like a complete package. You knew he had a certain style with his words, and so did he. He not only had a finished voice. He had a long term plan. Not content to merely self-publish collections like The Occupy Poems and have multiple features he started Ring of Bone Press, publishing two impressive anthologies as love letters to the Walnut Street Café and the writers located in his home stomping grounds.

Hardly a "madman" of Lynn, Blaine's energy was not what one would call manic. It was raw and plentiful but focused. Moreover, he was generous in sharing it. With his publishing projects, Blaine helped introduce the north shore literary scene to the wider audience it deserved. The poets of Boston's Occupy movement seemed legion as he started ending every reading with his "Occupy Everything" credo. Every place he touched is better for him being there and poorer for his passing.

The tragedy is not that Blaine had so much more to offer (which he clearly did), but that he clearly wanted to offer all he could for as long as he could. Blaine Hebbel was true to his word, occupying everything he could, everywhere he went. He will be missed.

Posted by Chad Parenteau at 4:06 PM

Blaine was one of the good guys. He was smart, generous and pissed off at the injustices of the world. There is a big hole in my heart where he used to stand.

I will miss Blaine. He was a force. His weekends of poetry in Ipswich were something I looked forward to every year.

He was a regular at Dire for years, and at Speak Up----He was always on the side of US, the people.