In the town I grew up in, before we realized we were getting ripped off by not getting the full six minutes of Queen's "Bohemian Rhapsody" on the radio (this happened even on classic rock radio before Freddie Mercury died, and anyone who says otherwise is lying), we were were grooving to the eight-plus minute Meatloaf opus "Paradise by the Dashboard Light." During one CYO dance, boys and girls took sides on the floor, girls belting the "Will you love me forever?" part and guys being lazy with the far easier "Let me sleep on it..." part.

In 1991 at Framingham State College, friends invited me to a Rocky Horror Picture Show screening. Of course, there were performers who reenacted the show, and before the feature even started, they pantomimed and lip-synched songs from Bat Out of Hell. That's when I was introduced to Meatloaf the person on screen. I appreciated Dale Meyer-Curley and co. for giving me a proper education, properly berating me for the review I wrote in the student paper.

Until then, sad to say, I only even knew what Meatloaf looked like was from this 80's ad that appeared on most Marvel Comics back covers for a while. 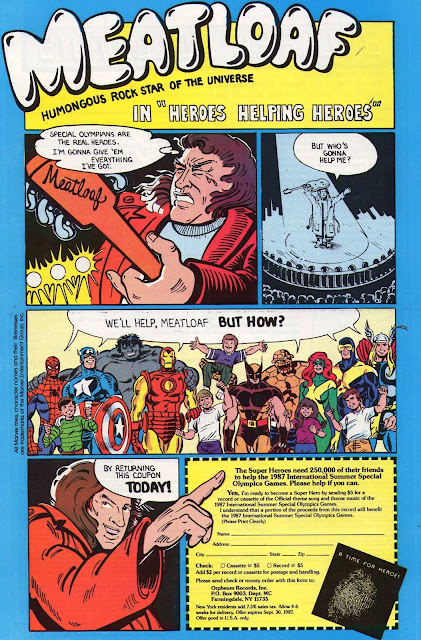 One summer later, I'm talking with a friend of a friend who told me he worked at a local park and helped set up the stage for a concert by Meatloaf, who was touring before Bat Out of Hell II was released. He said Meatloaf was a good guy. I think he met Meatloaf's family too.

In the late nineties, while waiting tables, a co-worker recounted line for line the best interview quotes for Meatloaf's underrated "Behind the Music" episode, which aired the night before. That was the first episode I ever watched, based on this coworker's retelling, and it remains one of my favorites. One of the rare episodes that runs on emotion and relies less on the subject's clownish nature. Meatloaf may have dressed funny in the past (and would later), but he was serious. Sometimes too serious, but it was hard to blame him.

Like that coworker, many of us saw Meatloaf as a feel good story. It was fun seeing him in movies after his "Behind The Music" moment. You never knew where he was going to show up, and you can tell he didn't back down from challenging roles.

Last October. my girlfriend and I took her daughter to the Mendon Twin Drive-In for her first Rocky Horror screening, complete with live performers. I recounted this to a coworker at my current job, and she told me she had never seen the movie. I showed her the Meatloaf scene, which to me was a perfect intro. Nice to be the teacher after all these years.

As far as I know, Meatloaf is the least of why Molly loves the movie (she went to her second Rocky Horror live screening in December, better dressed for the occasion). Meatloaf remains an Easter egg for her to find when she wants to know more about the movie. I hope he'll remain a fascinating subject for her generation and others after her. Yeah, Tim Curry is amazing, but do you know who this guy is?

Posted by Chad Parenteau at 9:10 AM

Email ThisBlogThis!Share to TwitterShare to FacebookShare to Pinterest
Labels: Behind the Music, Dale Meyer-Curley, Dance Music, Meatloaf, Paradise By The Dashboard Light