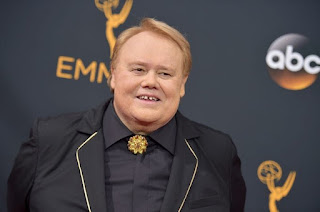 A staple in the 80's comedy world, which I was obsessed with as a kid thanks to cable TV. Amazingly at ease with an audience, even hecklers. His one HBO special that I know of was warm, carefree and dark while devoid of bitterness. It included a reenactment of being drunk that seemed to last half the length of the special.

The routine annoyed me at the time. Today, I can respect his commitment to his vision no matter how awkward or sad it could be tonally (even if he couldn't seem to see those parts as dark). It could get even berated by so-called peers, but he couldn't be any other way.

Though it was created after "The Simpson," his "Life With Louie" cartoon could be considered ahead of it's time. You can connect it to animated shows like "King of the Hill" if you think about it.

I can't think of any other way to end this, so here is a picture of Louie Anderson turned into a bunny on The Jim Henson Hour, an image that haunts and delights me to this day. 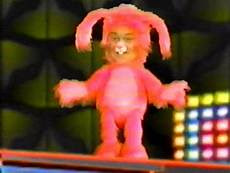 Come to think of it, a pleasant ghost haunting the present could be his next big role, giving us his message of "Life: Live it!" Good luck, Louie. I'm sure you've got the part.

Posted by Chad Parenteau at 2:15 PM