Christmastime in the City 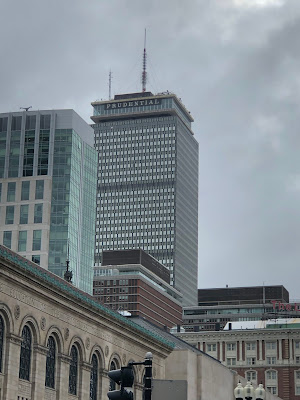 My first year waiting tables at Dead Fish in a Mall was the first time I worked night shift on Christmas Eve. I was at the bottom of the hierarchy. Maybe even lower! The owner had us work a full normal day serving the few people that came out of the hotel/mall chain.

I served a family of three. Sold them everything from the wine to the fish. Tried to give them space while tending to their every need. They were my top priority.

The bill came to ninety dollars. They walked away without tipping me.

I had secured a ride home from a coworker who lived one town over. Before we left, a group decided to get a drink at Top of the Hub in the Prudential. It was close to midnight. I didn't drink. I just took in the lights below from the Hub's amazing view, including the John Hancock Tower, still my favorite building to look at in the nighttime.

Now this is Boston, I said out loud, as dorky and touristy as it sounded. 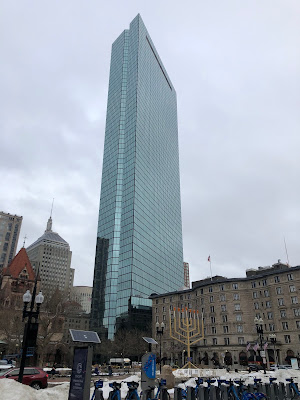 Over two decades later, I've gotten to know more of what Boston actually is. It's more than the building, but I still have a soft spot for these two locations.

This year was the first time I spent the entirety of my holiday time away from my family due to the pandemic. I took these two pictures on Christmas Eve while I was doing last minute shopping. The day was gray and the view lackluster. Still, I was happy to visit two old friends I don't get to see as much, and I'm glad Boston is still a part of my identity twenty-five years later.

Posted by Chad Parenteau at 9:30 AM