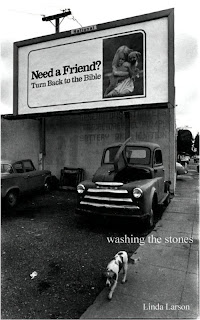 Posted above is the cover to Linda Larson's new book, washing the stones, as designed by my girlfriend, Lynne Sticklor. It's excellent work, and I've had the privilege of seeing a couple of the poems from the book. I'm looking forward to buying a copy.

I'll be booking Linda for a Stone Soup feature some time after October.

However, Linda will be reading at the Open Bark at Out of The Blue on September 8th. I urge you all to go.

As always with Open Bark, the open mike starts at eight, and the feature goes on at nine. A 3-5 dollar donation would be great. I've reposted the book information below, and when Mike Amado sends out an official press release on the reading, I'll post that too.

washing the stones
by Linda Larson

The Ibbetson Street Press has released a new poetry collection by Cambridge, Mass. poet and former Spare Change News editor Linda Larsen. Larsen was born in the Midwest. She spent a decade of her adult life in Madison County, Mississippi. She worked as a feature writer for The Capitol Reporter and The Jackson Advocate. Larson relocated to the Boston/Cambridge area where she has lived and worked for the past twenty years. For five years she served as editor and contributor to Spare Change News, a homeless newspaper based in Cambridge. Over the years Larsen has struggled with mental illness and addiction. She has been recognized by both houses of the Massachusetts Legislature for her advocacy work on behalf of people with mental illness. This book goes a long way towards recapturing her promise as a graduate of the John Hopkins Writing Seminars in the 1970's and as teaching fellow in the creative writing doctoral program at the University of Southern Mississippi.

Howard Zinn (noted historian and activist): "I am very moved by Linda Larsen's poems. They are about all the stuff of life--straight from the heart."

Joseph P. Kahn: (Boston Globe): "In her poetry we see glimpses of the enormous talent that's always been there-- and the courageous battle she's fought to keep that talent alive."

Marc Goldfinger (Poetry Editor-Spare Change News): "Jack Spicer, a unique and wonderful poet in his own right said 'Poets are the dictation machines of the Gods.' Linda Larsen's work proves this statement."
Posted by Chad Parenteau at 2:12 AM