My Article on The 2000 UMass Debate Protest

I wrote this article over a decade ago.  I'm not a hundred percent why I'm posting it today when by now damn near everyone has voted and decisions have long been made by the American people. Still, for a while I've been recalling when there seemed to be a time in elections when third parties were talked about more by the left.  I voted for Nader in 2000 but wouldn't dare try something like that for a long time.

I look back at when this the article below appeared in October 11th The Weekly Dig.  The issue itself focused on how the sad state of the Reform party and the overlooked Green party.  Mine was one of a handful of articles that focused on the protests outside the debates.  The articles were under one title calling the debates a sham.  I get equally sick when I think about the overall civility of the discourse then and how it's been replaced by in the form of the Tea Party, an illegal party in my mind.  Would the Democrats have been treated with kid gloves if certain members called themselves Greenbacks and took their party to task as a party/non party?

The racism I've been reading about amidst the voting battlegrounds has finally urged me to dust the cobwebs off of this piece and post it, including more photos than The Dig could allow at the time due to space.  I was the only reporter out of a group of photographers that stayed until the thankfully civil end of the confrontation between the police and the protestors (who tried to block the buses out, frustrated their candidate of choice, Ralph Nader, was never invited to voice himself).  I've always been proud of that moment in my life, which has come back to inform both my politics and my writing over and over again.  I hope that if Obama wins, I can come back to this time and hope for discourse like the kind we had in the past.  It was scary to bring up the similarities between Obama and Romney, for fear that we would have lowered our defenses some how and totally gave ourselves over to the lunatic fringe.  And people were afraid of demonstrators during the 2000 elections because of their black clothes and bandannas?  We lived in more innocent times.  Now I'm more scared of ties.

A final note before I go to vote: During the most heated moments of the post UMass Debate protests, a pile of Gore/Lieberman signs covered in the droppings of a police horse was spotted by one of the photographers, who said, "There's your Pulitzer."  I guess I took it to heart.  It graces the end of this article.  To be fair, the shit is mostly over the "Lieberman" part of the sign.  Prophetic signs lurk everywhere, my friends.

More Fair On The Outside Than On The Inside 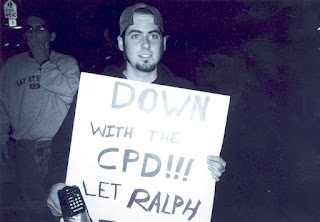 Out of all I saw the night of October 3, what the two major media sources failed to report on was the overall civility and fairness of the event. True, there were a few skirmishes throughout the day, and I even photographed some after the metal fences were dragged into the middle of the road. Still, no one mentioned the “street debates” beforehand which were which were more like simple group therapy discussions held some distance away from the site of the main protest. Even street performer Vermin Supreme had a voice of reason (and sense of humor) before the night’s main conflict. “We appreciate your help in maintaining order here, he said to the police as the debate ended. “Everything is under control. Your services are no longer required. You may return to your homes at any time. We are citizens, and we are here exercising our first amendment rights under the US Constitution to peaceably assemble and speak freely in order to redress grievances that we have with our government. Thank you. Smile, and have a nice day.” 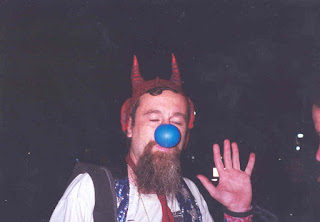 It surprised me even more that no major media source mentioned the bouts of friendliness between the police and the demonstrators. Even on the front lines, protesters took time to talk with the police. I even saw a protester and cop shake hands. I later talked to the protester and found out that he and the cop were talking about wanting to go home and sleep. Unfortunately, I wasn’t fast enough to catch the handshake on camera. Too bad. It would have been more solid proof that this wasn’t Philadelphia or Los Angeles. At least Al Crespo would agree. 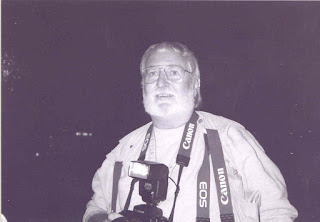 Crespo is a photographer working on a long-term project called Protest In The Land of Plenty who agreed that this (his 56th protest) was a far cry from the recent Democratic and Republican national conventions. “If this were LA, this place would be empty by now. If this were Philadelphia, then when [protestors] went over the fence, they’d have been over there clubbing them.

One of those on the front lines, Lieutenant Frank Armstrong, who overall had a positive view of the crowd, had this to say about blocking off the road: “From a libertarian standpoint, you have a right to go out and try, but we’re gonna have to move you.”

That sounds like most of the protest felt: fair. 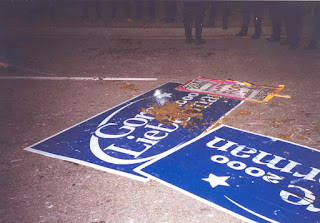 Posted by Chad Parenteau at 6:10 PM