I first met Lynne during a barbecue/fundraising party for the Out of The Blue Art Gallery at their second-to-last location in Cambridge on Prospect Street. Lynne was one of the few present in the afternoon, so we talked for a good amount of the time. We exchanged numbers, and we later arranged a time to go to a Poetribe reading in Brockton.

While on our "date" (she wasn't aware I saw it as a date until later), we began to get into a philosophical argument over whether people are the ultimate deciders of their fate, no matter how good or how terrible. This turned into a shouting match that left me completely flustered while she remained comparatively calm.

We dated for three years, having similar conversations throughout. We stayed friends for three more years after we broke up, going to events and occasionally working on Stone Soup and OOTB Gallery related events until 2011, when we stopped talking to each other. I refused to talk to her due to a course of action she took that I neither agreed with nor condoned. There were many such decisions of hers I lived with and tried to be supportive through, but this was too close for me to live with. It had to stop, and so did our phone conversations. I refused to answer her calls from then on. Eventually, she stopped calling.

I've told myself that walking away from our dialogue was the only way not to lose an argument and make my own decisions. In spite of the quiet between us for nearly a decade, I always thought there was one more big talk for us to have. Now I feel like I have the last word the same way I "won" our last argument, by being the only one in the room.

We spent six years together, and seven years later I'm still dissecting her actions and comments. Lynne's words were like that. My past words for her are online for everyone to see. They're caught in the pages of publications.They're in books I've published after we stopped talking. I'll continue my one-sided conversations after this month.

For Lynne, conversations were a contact sport. To ensure she had an active participant in a discussion, an intervention, or a moment to educate, she reached out to people emotionally and  physically, often being overwhelming to many. It was an intensity that surprised or helped and sometimes did both. Whatever the results were, you couldn't deny they existed.


With such a personality, it's clear that only Lynne could have created the concept of The Prize Lady, a persona that (as described in her press packet) invited audience members to have "spontaneous challenge[s] of expression" and have the "cajones" to implement this on audiences of shy artists and even shyer audience members with success.

I was not present for Stone Soup in the nineties, but veterans of that time have attested to Lynne being a nurturing presence for the venue, often taking over for Jack Powers during his inability to host and putting her Prize Lady persona to work.

By the time we met, Lynne was focusing more on her career as a nanny and her ultimate goal to move to a beach town (which she did, living in the north shore until her death). She couldn't commit to the weekly grind of organizing or promoting a poetry series.

In 2005, less than a year into dating her, she approached me with the idea of having me help videographer Bill Perrault with booking and maintaining a website for Stone Soup. Additionally, there was a chance of perhaps hosting once in a while.

I had never attempted anything like this in my life. It's a testament to her influence that I said yes.

Stone Soup would exist today in some form if I hadn't become part of it. But it's because of Lynne pushing me to get involved that I was given much needed purpose and shape to my day that I never even knew I needed.

Even though she was technically on the sidelines, Lynne stayed involved in Stone Soup, helping me to organize two fundraisers for Out of The Blue and eventually featuring as a poet in her own right. Additionally, she helped me co-edit my initial foray into online publishing with the first four issues of the Stone Soup tribute journal  Spoonful and contributed visual poetry under the name Sarah N. Dipity.

(That moniker, by the way, was also the one she used on her MySpace page, often interacting and attempting to empathize with other MySpace users who were "pro-male" and early precursors of the MRA/red pill drones that plague us to this day. She was as relentless they were recklessly cruel to everyone else--but not her, oddly enough.)

Arguably Lynne's greatest contributions to local poetry were her collaborations with other poets, working to edit, arrange, and produce these collections: Lo Galluccio's Hot Rain, Jennifer Matthews' Fairytales and Misdemeanors, Linda Larson's Washing the Stones, Ann Carhart's Sanctus! Sanctus! Sanctus!, and The Woman Has A Voice by Deborah Priestly (who told me recently that she may have never gotten that book out if it wasn't for Lynne, who was also instrumental in the choice of title).

Sometime before we stopped talking, Lynne was diagnosed with breast cancer. It wasn't long after that that she made her decision to combat her illness solely through holistic healing, with no other conventional treatments. This was the culmination of her views on fate and choice, the subject of our earliest conversations. She put her money where her mouth was, and it cost her.

From her dream home by the beach, she drew as many lines in the sand as she wanted, causing rifts (and sometimes outright breaks) in her relationships with family, with friends, and even with healthcare providers, who urged her to try other means. She persisted in this path to wellness regardless of the consequences.

Over the past decade I have lost three family members and two friends to cancer. To the best of my knowledge, nearly all of them had taken some form of  western treatment. If you added the time from each person's diagnosis to each person's death and tallied up their years (or even months) of time they had left, I think Lynne's final years on the planet outlasted even their combined time.

Whatever you feel about her decisions or actions, Lynne lived by her choices, making as many as a human being could possibly make in one lifetime. That's all she believed in and all she ever wanted. An Ayn Rand character mixed with spiritualism and a heavy dose of emotion, walking her own path. She was sad (and even angry) when people didn't understand her, but she never wavered in her decision, no matter who may have tried to talk her out of it.

Postscript: In the first year of our relationship, when we were driving home from the Cape, Lynne somehow got me to talk about my traumatic car accident I got into the night before I graduated high school, which fueled a lot of my dislike of cars and driving. At the end of my story, she told me that she felt she saw my 18 year old self "merge" (I'm sure that was her word) with my then-31 year old self, that somehow I had come to terms with my past and was somehow changed.

I had a hard time believing that then.

Fast forward to Tuesday. I had my first colonoscopy since 2004 and was terrified of what the results might be after waiting so long. Within twenty minutes I was finished and deemed cancer free. As I sat up while they waited for me to recover from the Valium, I  thought to myself, It's like my 2004 self is merging with my present self in regards to the fear that kept me away.

Then I paused. Then I chuckled.

And clearly I was still drugged up, so once again the advantage was hers. 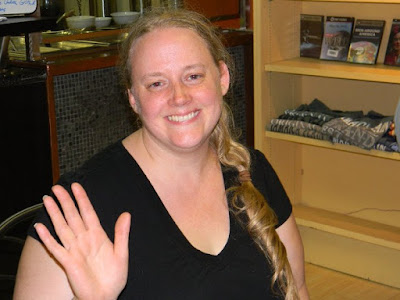 Posted by Chad Parenteau at 4:02 PM

Thanks Chad for your honest and robust tribute to Lynne. She had such warmth and fire, such power and grace. Watching her read her poems brings back to me that little girl meets warrior woman. Her innocence and resolve are apparent. The last time we fought Lynne insisted she would love her murderer as I insisted I couldn't or wouldn't do that. She was brave enough and good enough to try. I hope she's merged with all she loved about the spirit world. She will be missed.

Hi Chad, it's Ana Gordan, Lynne's friend. Your post is very rich and I'll need to read it a couple more times before responding completely. Need time to process some thoughts. For now some stuff at a shallower level...living nearby in Salem, we had great fun times hiking and got into birdwatching. I gave her rides to treatment and other practical stuff like checking her place, bringing her clothes & groceries while she was in nursing rehab places, doing her laundry, enjoying cribbage games...giving her a buzz-cut upon her request, the night last year she called me from her condo saying she needed to go to the hospital because her legs were paralyzed. She shut me out sometime late summer, but emailed a couple of updates that she could stand again with assistance...always full of hope that fuck yeah, she was going to walk out of there. Reason for shutting us out, I can tell you privately. The past few months the disease got to her brain & changed her. But we all knew her.