I Had Issues! Why I Can’t Talk to My Girlfriend About Comics, Part Eight 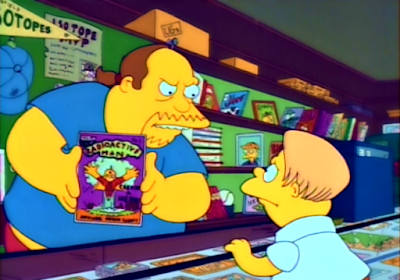 When I reposted the Aquman #6 review (link after the break), I addressed a reaction I got to the review when it was first published. I had totally forgotten that I had addressed this reaction in a column. Whoops? Also, I think this is the last column I ever did. There's a story behind that. I'll get to it another time. Ironic then that I ended this column with a "see you next time" phrase and never did a followup. Sigh. Originally published March 23, 2012. Edited for clarity and maybe to change a link and remove a name or two.

By this point, if you've read any two of the columns I've done thus far, you know that I don't really talk about my girlfriend. She was happy to serve as a straight man for me (and did laugh as I recited lines from the early ones), but sometimes it's a hindrance, as I always try to talk about comics in general. And today, I want to talk about my reaction to a reaction I got to my most recent Aquaman review. I made a reference to the creepy store manager (as seen above) and how unrealistic he seemed as a predator in power.

Someone who works in the comics field told me that people like this do exist...in the comic book field. Particularly retail.

I haven't seen evidence of this for a while, but I believe this person. And that was before I remembered the ebook Memoirs Of An Occasional Superheroine by former DC editor Valerie D'Orazio, a memoir of comics and sexual harassment which I plan to talk more about in the future (or at least a link to buy it once I find it online). Suffice to say, her experiences weren't positive as a female comic shop employee (and that was before she started editing comics). It saddens me to hear from the retailer friend that this kind of sexism crap is still out there.

Comics are a struggling field no matter how many movies you make based on them. As the host of a spoken word venue, I know first hand that with struggling fields and arts, you are often stuck with what you have as far as proprietors and participants, unless you struggle for years and years to make changes.

I've seen lots of positive changes over the last two decades regarding the stores that sell us comics, but every once in a while you're reminded that when an asshat goes on record making ridiculous and racially insensitive comments regarding something that should be regarded as positive or at the very least non-threatening, chances are that person isn't going to feel much heat or lose customers because
comics are still being read predominantly by older white males there aren't many stores around to take their place.
In Boston, if a store is not to my liking, I have about a half dozen more to choose from (one within walking distance from my apartment). In a mill town over an hour away from the prosperous, you're stuck with foolishness.

This is a bit of a taboo subject. I remember a recent podcast interview with Evan Dorkin where he mentioned the reaction he received for going off on comic shops in his print interview with The Comics Journal (still worth seeking out). But stories of ridiculous stores and their behavior still get out. Thankfully, I don't have any personally to share over the last decade. I've had some not-so-great shop experiences, but a lot more good ones (again, the benefits of living in Boston).

I haven't taken my girlfriend to a comics store yet, but I'm good knowing I can take her to at least one or two pleasant ones. Are there places where I wouldn't take her? Well yes...but not for reasons you'd think. More on that another time.
Posted by Chad Parenteau at 12:08 PM

Email ThisBlogThis!Share to TwitterShare to FacebookShare to Pinterest
Labels: (Sometimes) Wednesday Comics, I Had Issues