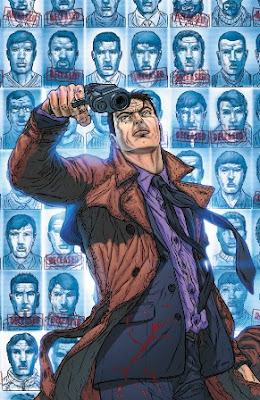 Kind of a bland entry, as I ended up not being as committed to Clone as I thought I was. Ah, well. There will be other fun entries before I wrap this archive up. Originally published Mardh 27, 2013. Slightly edited for clarity.

The fifth issue of Clone is coming out this Wednesday. I won't be able to grab it until tomorrow, but it's still a good time to recap the last four issues. It won't break your bank too much if you decide to grab them along with the new issue (though the first trade is likely going be cheaper when it comes out, damning my support of the medium). A quick synopsis as to why you should do at least one or the other.

I'm not big on TV nowadays, so I wasn't familiar with David Schulner's TV work. Surprisingly, Clone doesn't feel too much like a TV or movie product turned to strip (unlike, say Happy and Joe The Barbariann). It feels episodic, but that's what I sometimes like if I'm buying individual comics.

The premise is somewhat stocky while hitting some political hotpoints. Luke Taylor is A father-to-be has his wife kidnapped and finds out he is likely one of many clones, even though clones aren't supposed to have kids. His sole resort is to rely on himself. Or himselves, as it is, as the clones band together and fighting for their own continued existence from those out to get them, including stem cell research opponents and a clone who wants to be the original by default of killing all the others.

What REALLY sells the book for me is artist Juan Jose Ryp! One of Avatar's champions of gore and excess is doing a regular, ongoing series, and doing it relatively straight! With only an occasional exploding blow to the crotch.

Aside from moments like this, it's strange seeing Ryp on such a normal book, with only occasional episodes of blood and guts. It's kind of like Geoff Darrow doing a Daniel Clowes story in comparison. Any awkwardness in the art is worth it just to see Ryp settle into this series with its neatly unfolding plot. I'm in it for at least the next upcoming arc.