Stone Soup Croutons is a weekly poem I write using lines and impressions picked from Stone Soup's open mic readers and features. I figure out a title (and sometimes the rest of the poem) later. You can read the other ones I've done since 2015 here. To paraphrase Lorne Michaels, this poem doesn't go up because it's ready, it goes up because it's Friday morning.

Jamilla VanDyke-Bailey gave us an amazing feature Wednesday night. I'm grateful to her for being Stone Soup's historical first online feature. I hope you will support her if you haven't already. I hope you support her through her Cashapp ($thekweenmother) her Venmo (links to it will be on Facebook) or by buying her book.

I also want to preface the poem below saying that while I make allusions in the body of thepoe to Kendrick Johnson and Breonna Taylor, (both mentioned by Jamilla during her feature). I even made referrence to a story about one of George Floyd's murderers from last weekend. This is due to the way I try to reflect the content of the open mic in the final poem and not meant to minimize their tragedies. In fact, I urge you before reading my poem to read up on to look up their stories if you don't already know them and try to use existing hashtags on Facebook and Twitter to raise public awareness. Thanks for reading.

A Matter to Listen

Toxic partners role play their abuse,
Bondage and Bandages until one
realizes it's no longer a game.

World leaders launch force from space,
try to hit part of the little blue dot
that doesn't include one percent.

These are old stories, updated by
science and Hollywood. Every day
Code Orange, Blue and Green fake news.

All have righteous hands for those
they'll never meet. Children choose to
never be seen, employee file too thin

to ever be discovered, small enough
to survive a room's closing walls,
eyes open only to their shoes.

What banner to gather under while
they miss calls from parents, ties
dissolving like sap with pine cleaner.,

wishing they could choose what is
erased, what bones get to be
consecrated. This disconnect

beginning from the mother's side,
failing guidance counselors just by
knowing exactly what they want,

trained to be dragged in kicks and
screams to what was always desired.
Don't see them wrapped for coroners

and call it suicide, the killers
reading about their getaways
while in line with groceries.

Help them welcome their children
and not be forced to pass on death
as very first inheritance. 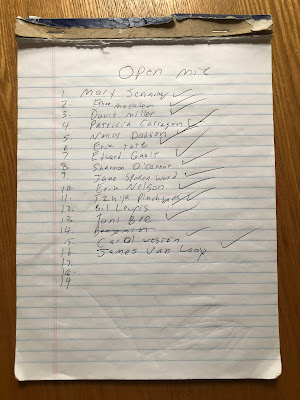