Scenes from the Countdown 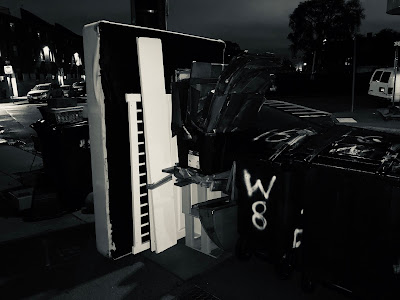 You can tell you're going through some real heavy life events when you have zero time to blog about them live.

I worked nearly 60 of the 96 hours that made up my long weekend. I can only write about it now, when it's all over.

My girlfriend and I moved into our new place this weekend. Then we spent this past week finishing up cleaning out her apartment. Our last day was yesterday, but we finished everything early and said good bye Wednesday night.

This past Saturday morning, down in the shared driveway of my girlfriend's apartment, dudebro neighbors were throwing a football around and filing up our recycling bin with beer cans. This during a weekend that left us with at least five bags of recycling to get rid of during our move. Not to mention all the boxes we didn't end up using. Plus the boxes we used and managed to empty out before Tuesday sent us back to work.

Later that Saturday, the wind started whipping nearby trees around and we worried that a neighbor's tree branch could fall off and hit my girlfriend's car (again). I brought it out to the street. We got a $25 dollar ticket for blocking our driveway. Which we didn't. Because a hundred cars have taken that same spot without ever blocking our exit.

I had to come back on Tuesday night to bring the recycling down and drop them into several bins on our block, as well as bring up more trash from the cellar to the sidewalk.

The person who brought the garbage out for my girlfriend's building every Tuesday, who I have never ever met before, caught me carrying stuff out and yelled at me for having left so much for him to carry to the sidewalk. "At least leave some room for the rest of us!"

We would have carried everything out to the sidewalk ourselves, but to put it out early would have meant a fine for the landlord, who would have likely passed it on to us. Plus my girlfriend and I are both essential employees who still go to work in the morning. On top of that, we had a scrap collector that afternoon pick up our busted air conditioners and other metal before this person tried to lift them. Plus we gave many pieces of furniture to a friend over the last two weeks.

It could have been a much larger pile, but it wasn't.

I had no time to explain that to this person.

"You know," he said, "If you were going to leave so much stuff, you could have asked all your neighbors to take some pieces and bring it over!"

Neighbors. Right. Like the dudebros leaving a pyramid's worth of alcohol containers in our recycle bin. Or my girlfriend's second floor troll who took time out of his unemployment to gaslight me and my girlfriend, likely even tampering with the dryer so we couldn't get laundry done without walking two blocks to the local dryer.

Southie, we'll miss you. Even though you did everything you could to make us not.

Posted by Chad Parenteau at 6:21 AM