Stone Soup Croutons is a weekly poem I write using lines and impressions picked from Stone Soup Poetry's open mic readers and features. I figure out a title (and sometimes the rest of the poem) later. You can read the other ones I've done since 2015 here.

I also have an award nominated book out now collecting the best of my first year of poems. Click here to purchase it.
John Mulrooney finally featured on Wednesday. It's something I've wanted for a while. It's weird to be thankful about the opportunities a pandemic brings, but I'll take it.
It was humbling to know that I have to work very hard if I'm ever going to write a Boston poem even half as good as John's work. I had no set plan with this poem, just a series of silly jokes. Somehow, it also became a Boston poem. And it also became kind of a Saint Patrick's parade poem (but only kind of). John's work has that affect on me. That's the only defense I have, your honor.
Hey, it's still a series of silly jokes. After all, this is me we're talking about. Thanks for reading.
Fools on Parade
James Joyce's saffron touched
love letters are up to his relatives
to handle. He got away scot-free,
let his yearnings jut out
like an elephant's rumpus
during art talks at a dinner.
What else is art but that
which you force people to swallow?
Latest murder scene: A prankster
is set up with planted banana peel.
Forensics forget to mention
the fruit was plastic all along.
Don't incriminate the jokester
who chose his unpaid profession
to make their stoic father stitch,
back broken on pratfall takes.
Meanwhile, taxes for the rich.
Just kidding! We pretend this is a joke.
It gets worse. That's a punchline now.
Every night, the sky moons the town
just to get us out of our funk
of reality show "comedy"
while in isolation, bottling urine,
imagining we'll roll them downstairs
towards the first old normal normies
rushing subway rush upwards,
crowd groaning from labor pains, tweeting
to corporate they're glad to be back.
Play a game of London Bridge with
amputees. Everyone gets out alive.
We all can run down Boardwalk
with just the weight of ourselves.
This swan song is really a setlist.
Carry the beat from Boylston Street
down to the docks. Why not finish a parade
with a "you first, no you first" skinny dip,
a second moon to no ships coming in.
Anything against the darkness.
Ship God and the Devil together
in new holy yaoi scripture.
Confess in riddles what you've done
to unsavory statues in southern sates.
Brandish your mighty mirth
like George Washington's sword,
ready to throw it all the way
to Frank Rizzo's heart in Philly.
All roads lead to the penultimate
goof. No god. It was us all along.
Us along with friends and
neighbors, all in on it.
And we will dance and laugh until
we collapse, taking the city with us to bed,
worn out from a love supreme of ribbing
enough to give Adam a harem. 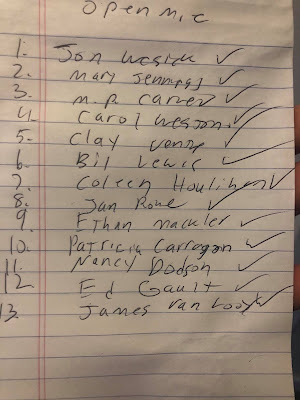