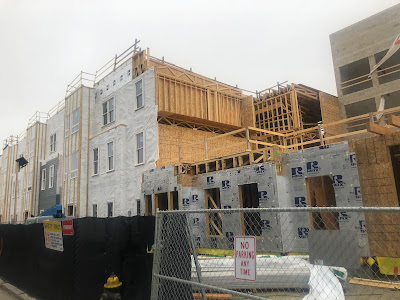 Took a walk on Sunday down my not-so-old stomping grounds. East Eighth has already changed a lot in less than six months. The new special housing is either up or in progress. No one living in any of the new buildings yet. The neighborhood is unusually quiet even for a pandemic.
When I first moved to South Boston, I was too naïve to know about terms like section eight housing. I was jealous of anyone who had a home and felt lucky to live around the corner of East Eighth Street in my awful apartment with rats, bad heating, freezing pipes and a downstairs neighbor whose boyfriend reenacted scenes from the TV show "Cops" with actual South Boston police.
When my original roommates moved out, people I interviewed didn't want to feel that lucky.
When we had to recruit our first replacement, we had the idea to go up on the roof so they could see the beautiful view. This was, in retrospect, a worse idea than we imagined. When both the old roommates moved out, I brought yuppies in training to the top, most of whom couldn't help but look at the East Eighth housing and wonder how safe it was.
One man came up to the roof with his girlfriend and tried to ask about the neighborhood without addressing the predominantly black residents (which were never a problem, ever).
"Uh, yeah, do you ever have any, um, issues with, y'know, any of the neighbors?" His head kept on trying to point to the buildings he was referring to without directly identifying them.
I don't remember what my exact reply was, but I know I was trying to be the good host and make him feel welcome.
He never moved in.
Knowing what I know now, I should have said, No problems at all, sir, so long as we sacrifice one white woman every month on the 15th. Have you been with your girlfriend long?
Of course, there are enough white people who helped break the ice over the last two decades. Who knows how much people are paying to stay at my old place.
Sadly, I suspect there will be even less of a problem for yuppies afraid of black people by the time all the new structures are up.
Ah, gentrification.
Posted by Chad Parenteau at 12:11 PM