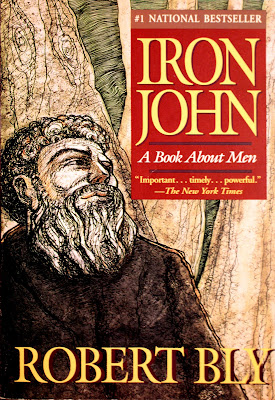 News of Robert Bly's death, even as I write this. hasn't reached everyone yet. As far as I can see, no official stories of his passing have yet been published online. Meanwhile, people are lining up behind Kyle Rittenhouse to collect and store his farts, eventually turning them into NFTs. It's pathetically appropriate that the poet who wrote about men left this world after we received a glimpse of the world's future, a place inherited by violent, coddled man babies.

If there's one good thing I can say about Scott Adams and Dilbert is that this strip made me, a fledgling poet, first aware of Robert Bly. I purchased and read his book Iron John before any of his poetry.

Much has been said of Robert Bly and his approach to manhood, but I look at boys walking with guns the way I used to walk around as a child with plastic swords and wonder if his philosophy should be re-examined.

My favorite quote in Iron John had to do with his belief that it would be good if more politicians and poets spent time in jail.

During my short time as a poet, years before I ever hosted an open mic, Robert Bly made me want to be a poet bounty hunter.

His book The Light Around the Body held one of my favorite poems, "Counting Small-boned Bodies," a piece I tried and failed to imitate numerous times.

One of my favorite  moments at Framingham State College (now University) was in Alan Feldman's creative writing class when he asked us to bring in a fruit or vegetable for an in-class writing assignment (I brought a golden apple).

With our food-topped desks, Feldman told us the inspiration for this exercise, recounting a time when Bly spoke in his class, which he retells here:

I haven't really written about my father or mother in a long time. I haven't read Bly for almost as long. I think I need to do both again very soon.