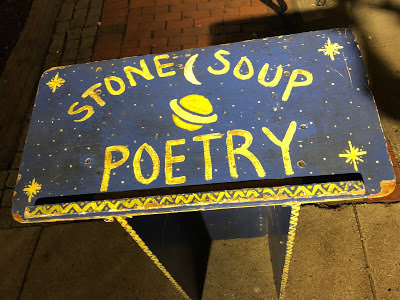 Last year in August, the Stone Soup Podium, which has been with us over several locations for at least two decades, was turned over to Ryan "Ratt" Travis, who said he would give it a much-needed makeover.

It is now January, and thanks to Ryan, the podium is back with a new look, which is what I have wanted for a while. This Friday, it was delivered to Fort Point's Assemblage Gallery, ready for this week's gathering. 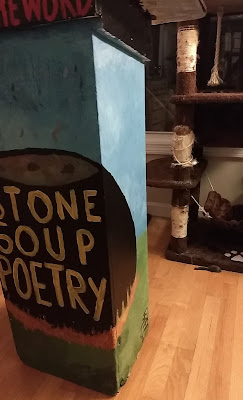 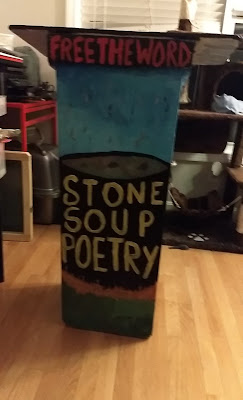 I'll miss the podium's old look, but in my time hosting Stone Soup, the series has gone through many changes, locations, even eras. I wanted the podium to reflect our new surroundings.

My eternal gratitude to Ryan for taking on the task. You can see the podium up close this Wednesday, January 15, when we will be featuring Terry Orlando Jones. Those are just two of many reasons you should come see us as often as you can in 2020. Still on Wednesdays, but with a new 7-9 PM time slot.

With this new time, I'll now be willing and able to meet people down at South Station and lead them to our new venue. I did it last week for an old friend and would love to do it more for those who want to come but are afraid they'll get lost. Please contact me if you are one of those people.

Our new home takes getting used to, but I guarantee you won't regret it once you know the way.

Posted by Chad Parenteau at 8:25 AM