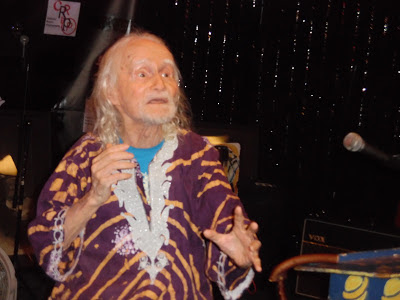 News was shared that on Sunday, July 21, we lost William J. Barnum, better known to poets as simply Bill Barnum. As a descendant of the PT Barnum legacy, he was a clown, a mime, a ballet dancer, an actor, a poet and possibly many other things well before he made Boston his home.

It's no surprise so many poets have written about Bill More than a few of us had written poems for him. James Van Looy has been telling Bill Barnum stories for years in his work. And when I wrote poems for John Roche's anthology based on his own myth, the immortal Joe the Poet, who else should I have had Joe meet with as an equal but Bill, who always seemed to be a frailer yet somehow equally immortal being.

I can't remember the first time I saw Bill perform poetry, but for years after, whenever I ran into him, it was less about his poems and more about interacting with him. You can hear about his time growing up in the  Barnum & Bailey circus, starting as one of the extras in a clown car routine, but it's no substitute to seeing Barnum in action yourself.

Most of my best memories revolve not around Stone Soup gatherings, but more random times when he would just...show up. I still remember 2004 when the Democratic National Convention took place in Boston. Armed military personnel were stationed all around the Boston Common, ready to come at me if I set my heavy backpack down on the ground. Unfazed at the center of it all was Bill exchanging acid stories with a homeless man.

In 2005 or 2006, I was Tom Daley's apartment about to begin the first of a series of workshops, and Bill just walked in as one of us! He was a fellow workshop participant. Tom's home was hard to get to even with pubic transportation, and this was in the middle of a cold winter. I don't know if we ever figured out exactly how he got there, but when he was there he was as enthusiastic to share his work and listen to ours.

I heard another story that his family used to simply send him money every month, which had to stop when they learned he was giving it all away to people on the street he didn't even know. This trait came out as I saw him collaborate with friends who were eager to keep him performing. I also saw people take advantage of his good nature and leach off it to advance their so-called poetry "careers." To my amazement, Bill treated all of these people with equal enthusiasm and generosity. He couldn't do it any other way.

Though I've known him for over fifteen years, I came into Bill's story very late in his life. By the time I hosted Stone Soup Poetry and he came around regularly again, he had an even harder time moving about. During another harsh winter night, Bill slipped and fell outside of the Out of The Blue Gallery while most of us carried on with the open mic, oblivious to what had happened. Deb Priestly stayed with Bill until an ambulance came to take him to the hospital to deal with his bleeding wound. Bill resisted going into the ambulance, not wanting to miss the poetry going on inside.

That was how it went for another decade, with Bill's failing body in competition with his passion for words and performance. That's why we are thankful for caregivers like Bob Johnson and Annie Goldstone, unsung heroes responsible for Bill's continued presence in Boston and Cambridge until his move to New Hampshire a few years ago.

Even all the way up north, Bill still took visitors, performed when he could and read all the mail sent to him. I try not to think about afterlife most of the time, but now that Bill is gone, I have to wonder: Where did all that energy go off to?

The poems for Bill will start coming in. Friends have already told me they are writing them. Eventually, there will be a tribute night. Then again, as I wrote above, poets have been writing tribute poems to Bill for years. Poems about Bill have been recited without him being in the room (the highest compliment a poet can receive in absentia). I don't usually think like this, and if I believed Bill's spirit was visiting anyone, I'd gladly be the bottom of an immense list. Still, maybe Bill's energy is with now, and that's why I don't feel like anything has changed yet.

If I'm right, let's hope his energy stays with us for a long time. There are still stories for us to share. 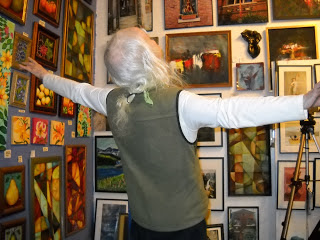 Thank you, I'd been aware of Billy for years as a performer, but I hadn't heard of a lot of this.

Well written, Chad. He was such an unexpectedly creative spirit. It's hard to find the words to describe his work but no one is ever the same after they experience his work.

Thanks so much for posting this, Chad. I now feel I have a little bit of knowledge about him and wish I had known him better. What's going on with Deb Priestly? I haven't seen her since Stone Soup left Cambridge.

Asking about personal information of a private person on a public blog is extremely inappropriate.

I used to blog a lot about Bill when we were both in Cosmic Spelunker Theater along with James Van Looy, I should find those pieces and see what's worth sharing again.

At the moment, I just want to note that whatever familial connection he had with P.T. Barnum and the circus was distant. The exact relation was never specific, Phineas Taylor was sometimes described as a great-uncle or or second-cousin-however-many-times-removed, or "something like that." While Bill certainly did his share of clowning in his career as a performer, the connection between him and the Barnum & Bailey Circus was mythology that others created around him, and he was too polite to dismiss, unless one was asking for a factual answer.

Ian, you note is surely...noted.

I should point out that I put in the clown car reference knowing it could likely be apocrypha, as a lot of stories I heard about Bill were second hand.

Based on my years of talking to Bill, I'd say that probably any story you hear connecting him to P.T. Barnum or the Barnum & Bailey Circus is apocrypha.

His connections with the worlds of theater, ballet, and mime, however, which are rooted in truth. However, I found that people on the poetry scene tended to be a lot less interested in asking him about that, and more interested in the myth, and he would just nod to the myth and go on with his performance. Of course, Bill was rather mischievous, and I am sure that he elaborated those true stories a bit for the sake of amusing his audience. When asked a direct question, however, he was fairly insistent on telling the story how he saw it. The stories he tells in the 1991 Squawk interview with Jessa Piaia that you archived are pretty consistent with what he would tell me ten-to-fifteen years later.